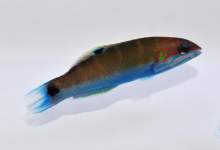 Klunzinger’s Wrasse, Thalassoma rueppellii (Klunzinger, 1871) is a stunning fish with a distinct coloration. Though this wrasse is a relatively easy to care for, it can be rather territorial, and this can lead to aggression towards other tank mates. It is suggested this wrasse be kept with other similarly territorial fish in a sufficiently sized tank (70 gallons or more) with many places to hide and claim residence.

Physical Description– This wrasse has vivid green and blue body, with striking purple lines across its body.

Temperament– While Klunzinger’s wrasse has an aggressive nature towards tank mates; it will usually not show aggression towards corals and other live plants.

Diet– This wrasse eats a primarily meaty diet consisting of frozen Mysis and other crustaceans.

Distribution– Klunzinger’s wrasse can be found primarily throughout the Red Sea.