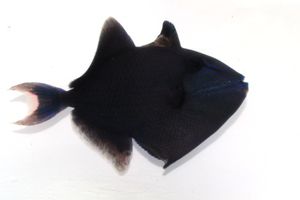 The Niger triggerfish, Odonus niger (Ruppell 1836) is an extremely popular aquarium fish due to its hardiness, active swimming behavior, and outgoing personality.  Like all triggers, these fish are boisterous and require aggressive tankmates, large open spaces for swimming, and a tank of stable rockwork.  Triggerfish may rearrange the rocks in their tank so it is important to epoxy any loose rocks down to prevent any damage.  The Niger trigger has extremely sharp teeth that are constantly growing.  To help these fish “trim” their teeth they should be given hard-shelled shrimp, clams on the half shell, as well as meaty foods like squid, krill, and silversides or lance fish.  Once acclimated to the home aquarium, these triggers will learn to recognize their caretakers and will actually beg for food and may be taught tricks such as rolling over!  This gregarious feeding behavior makes these fish a favorite among hobbyists that can accommodate their large size and aggressive nature.

Temperament– Niger triggerfish are very aggressive and should only be housed with other aggressive tankmates such as lionfish, eels, groupers, etc.  They will most assuredly fight with others of their kind so only specimen may be kept per tank.  If the system is quite large they may tolerate triggerfish of another genius.

Size– These fish will grow to over a foot in length.  Due to their size and active swimming behavior they should be housed in 200 gallons or larger.

Diet– feed them hard-shelled shrimp, clams on the half shell, as well as meaty foods like squid, krill, and silversides or lance fish.

Distribution– The niger trigger is found in almost all tropical regions, from the coast of Africa, throughout the Indo Pacific, north to Japan, south to Australia, and as far east as the west coast of the Americas.  Our Sustainable Island specimens usually come from Africa or Fiji.