Tangs fall into the family Acanthuridae, a name which means thorn tail, and is translated into their nickname “surgeonfishes”. This name stems from the spine found on either side of their tail, which are surgically sharp and to be avoided. In larger tangs, these spines can cause deep cuts as if with a scalpel.

Some tangs species remain fairly small (several inches to around a foot) but the largest can reach three feet and are a featured food fish in the tropical areas where they are found.

Tangs have a small mouth which is pointed and extended and has a single row of teeth. Many feel they are vegetarians, but we observe they are quite the omnivores, eagerly accepting most seafoods, though most do need algae in their diet to keep the cultures in the GI tract healthy and functioning.

The most popular tang has been the yellow tang, found in Hawaii and some archipelagos west of Hawaii. This fish was immortalized in the Disney movie “Finding Nemo” as “Bubbles”.  The largest population of yellow tangs is found in the southeast of the Hawaiian chain on the big island, particularly on the western coast of the big island, the Kona area. We have observed that the densities of the population increase as you travel from the Northwest islands of Hawaii towards the Southeast islands, till you come to the last one, and there one finds the largest populations on the western shores of this most southeasterly island at Kona.

Since the larva of the yellow tang is capable of remaining as a plankton in the water column even after the larval period, we have speculated that perhaps since the prevailing currents are following the chain from the north west to the south east, it is possible that the brood stock for each island is towards the northwest and the broodstock on the big island may very well be losing their spawn to the pelagic spaces. If this is true, the most sustainable practice would be to protect the populations in the northwest islands as broodstock and only collect on the big island, near Kona.

Hawaii boasts several species popular and important to the aquarium trade, starting with the yellow of course, but also including such popular animals as the Kole Tang, the Achilles Tang, and the Chevron tang. These three are found in far fewer numbers than the yellow tang. In fact, the name Gold Coast of Kona was inspired not by gold in the hills but by the yellow color often seen in the waters off Kona due to the very large populations of yellow tangs.

Throughout the Indo-Pacific from the Vanuatu and the Solomon Islands in the east through to Papua New Guinea to the west and the Philippines to the north are found a wide variety of attractive tangs, not the least of which is the blue tang, made famous by the Disney movie “Finding Nemo” in the character “Dori”. The Indo-Pacific region is home to many popular genre of tangs, including the nasos, bristletooths, and Zebrasoma, among others.

A very popular tang is the purple tang, found in the Red Sea and generally very expensive in the hobby. It can be somewhat unavailable to the trade due to the political and geopolitical instabilities surrounding the Red Sea area. Years ago the Saudi’s allowed collection and importation but no longer allow this. The Gulf of Aqaba near to Jordan is a very large long protected marine sanctuary and therefore makes collecting there a logistic challenge, and it is a long drive to Jordan’s capital Amman from Aqaba where there are direct flights to the US.  Of course political troubles in places like Yemen, Sudan, Egypt and Somalia make collecting in Red Sea very challenging at this time.

Conditioning tangs for spawning is a fairly straightforward task given the right Broodstock, conditioning, and holding facility, however raising the larvae through the first few weeks, one faces a large challenge similar many marine species of interest to the hobby: finding a suitable live food for early feedings.

The larvae are smaller than the larvae of other successfully raised aquarium fish, and it is thought they prefer to eat small copepods that do not easily lend themselves to the dense cultures required for breeding operations. These copepods have a jerky motion that attracts these larvae and elicits a feeding response, whereas even a small rotifer swims smoothly and escapes the larval fish’s attention and reaction. So this is a very worthy problem to crack!

In the mid-1800’s, these larval tangs were incorrectly identified as their own family (Acronuridae). Later it was discovered that these fish (now termed the “acronurus” stage larvae) grew and developed into tangs!

SA through its SI unit seeks to procure small juvenile tangs at the settlement stage, ideally the late acronurus stage, leaving the broodstock in the ocean to continue reproducing. These fish are then acclimated, socialized, and raised in aquarium conditions in the SI facilities, learning to eat easily-obtained diets and feeds so to assure high survival rates in retail and hobbyists care.

Tangs can live for a very long time. For instance we have in our hatchery tangs that we have kept for more than 13 years and are very healthy and energetic, so these we believe are about 15 years old or more. Yellow tangs in public aquariums have been documented as living for more than 40 years! We don’t know how long they live in the wild, since predation is a key morbidity factor. We do know that moray eels depend upon tangs as an important source of food, and given that the tangs are diurnal and the eel nocturnal, as the tang finds a sleeping perch tucked into a rock space, the eels begin their nightly hunt.

Keeping tangs in an aquarium presents limited challenges which need to be respected: 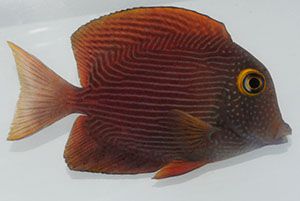 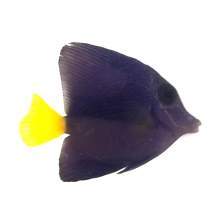 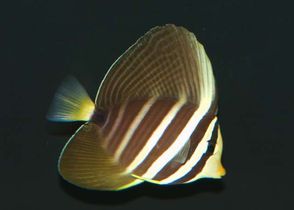