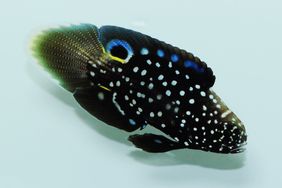 Marine Betta (Comet) The marine betta, Calloplesiops altivelis, (Steindachner, 1903), also known as a comet, is a stunning addition to the marine aquarium. Adults generally choose a cave or crevice to spend most of their time, although they will quickly recognize the aquarist and venture out looking for food. Though very shy, the comet displays a curious nature as one stands and observes its tank. Often, the comet will display its remarkable appearance in an attempt to appear larger and more frightening. The comet has a unique swimming behavior; it will pivot its entire body while keeping its eyes stationary. This is thought to be a territorial display and way of using its false eyespot to confuse predators. The comet is not a rare fish in the trade, but its cryptic behavior and relative rarity on the reef (as compared to other popular aquarium fishes) means that it is not always available or available in great numbers and can be costly. Sustainable Aquatics has developed a breeding program for this fish so that we will be able to offer Marine Bettas reliably as an affordable choice for the home aquarium.

Physical description– Their bodies are a dark brown to black with white spots throughout, and an eyespot near the end of their dorsal fin. When fully displayed the fins give them an oval-like shape. It is thought that the appearance of the marine betta and its eyespot is used to confuse predators into thinking that it is a moray eel.

Temperament– The comet has a somewhat shy yet curious nature, often preferring to hide in what crevices are available to them. They are nocturnal; as a result much of their activity occurs at night. Marine bettas could be considered “reef safe with caution,” as they won’t eat corals or polyps, but they are predators and may consume small fish and ornamental shrimps.

Diet– Comets prefer small crustaceans and fish, making keeping the comet with shrimp or other small animals a risky endeavor. Tank-bred comets from Sustainable Aquatics will eat almost anything small enough to fit in their mouth. They enjoy small meaty foods (shrimp, krill, mussel, fish, squid, etc), cyclop-eeze, mysis, and of course our SA Dry Hatchery diet, which they quickly learn to take from the surface.

Size– The marine betta or comet can grow up to 8 inches.

Distribution– The comet ranges throughout the Indo-west Pacific in reefs crevices and caves at depths from 3-50 meters.