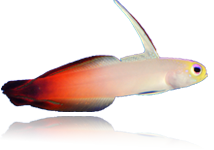 The firefish, Nemateleotris magnifica (Fowler, 1938) is the most famous and sought-after dartfish and is one of the most recognizable fish in the marine aquarium trade.  Their popularity is due to their peaceful nature, ease of care, and bright, flashy colors.  Like most dartfish, firefish stay in pairs or small groups in the wild hovering on the reefs catching small microorganisms out of the water column.  In the home aquarium they will readily learn to accept prepared foods.  At our Sustainable Islands project we feed them our hatchery diet supplemented with frozen cyclopeeze, brine, and mysis.  These fish are reef safe and will do best in a natural set up with live rock in which they can dart into when frightened, live sand, and a mild current near which they will hover waiting for food.   Firefish may jump from an aquarium if startled so a tight-fitting lid is necessary.

Physical Description– Firefish have a long, slender body with large eyes, and an extended ray on their dorsal fin.  The first half of their body is white, with a pale-yellow face and purple accents around their eyes and on the top of their head.  The second half of their body fades beautifully from bright orange to deep red and their caudal fin has dark green lines.

Temperament– Firefish are extremely peaceful and will do well with non-aggressive tank mates.  They can be kept in pairs or small groups provided that all fish are added at the same time.

Size– Firefish are good for nano tanks, reaching a maximum size of 3 inches in length.  A trio can be kept in 10-20 gallons, but a larger group should be housed in 30 gallons or more.

Diet– Firefish in the wild consume small microorganisms out of the water column.  In the home aquarium they will readily learn to accept prepared foods.  At our Sustainable Islands project we feed them our Hatchery Diet supplemented with frozen cyclopeeze, brine, and mysis.

Distribution– Firefish have an extensive range from the eastern coast of Africa throughout Indonesia to the Coral Sea.  Our specimens normally come from Africa.