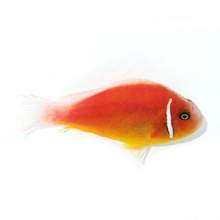 Sustainable Aquatics is proud to offer captive bred Fiji Pink Skunk clownfish, Amphiprion perideraion.  These beautiful fish are found in the Indo-Pacific including areas such as Fiji, Australia, and Coral Sea.  The Fiji Pink Skunk has a light orange complexion with a hint of pink that gives them a sun kissed appearance.  Like other skunks, they have a white stripe that runs from the nose dorsally to the caudal fin.  What sets the pink skunk apart is the vertical white stripe before the gills and pectoral fin.  In the home aquarium, these fish do well in both fish only displays and reef systems.  These fish prefer aquariums with plenty of hiding spots to seek shelter when startled.  Pink skunks will often host anemones including Sebae Anemones (Heteractis crispa) or various carpet anemones (stichodactyla spp.).  Aquariums of at least 29 gallons or larger are best to prevent any aggressive behavior displayed in smaller tanks since these clowns have the potential to reach three or four inches in length.  These clowns feed primarily on Hatchery Diet at Sustainable Aquatics and will accept most prepared foods ranging from Hatchery Diet pellets to Mysis shrimp.

Physical Description– The Fiji Pink skunk clownfish is a slender clown with a gorgeous orange, yellow, pink body color.  The white dorsal stripe and vertical stripe behind the eye adds to its beauty.

Temperament– Considered semi-aggressive in the wild, captive bred pink skunks have a much milder nature and will get along in most community tanks 29 gallons or larger.

Size– An average sized clownfish reaching a length of 3 to 4 inches and around 2 inches in height.

Diet– These clowns feed primarily on Hatchery Diet at Sustainable Aquatics and will accept most prepared foods ranging from Hatchery Diet pellets to Mysis shrimp.

Distribution– Fiji pink skunks can be found in various areas of the Indo-Pacific from Fiji to Australia, Vanuatu, and the Coral Sea.