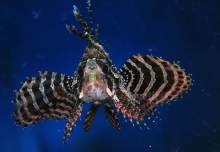 The dwarf fuzzy lionfish, Dendrochirus brachypterus (Cuvier, 1829) has become extremely popular in the marine aquarium trade due to its relatively small size and personable disposition.  They are prized for their unique appearance, beautiful coloration, active eating habits, and the ability to recognize their owner and even “beg” for food. These lionfish have a fairly large natural range, being found throughout the Indo Pacific, and are commonly available in the trade.  One of the most important factors to note in owning a lionfish is their venomous spines which can deliver a nasty sting, similar to that of a bee sting.  While these fish are not normally aggressive towards humans, one should always take care when working in a tank with lionfish. The ideal set up for these fish includes a larger tank with much rock work, caves, and crevices, where the lionfish can perch, waiting for food to swim by.  Lionfish have a reputation for being extremely hardy in captivity.  They do require good water quality due to the amount of waste they produce but they handle small fluctuations in water chemistry well and because they do not need to be fed daily, are relatively low-maintenance.

Temperament & Compatibility– While these are predatory fish, they are generally not considered aggressive.  They will eat smaller fish such as clownfish, cardinals, damsels, gobies, or blennies if they are small enough to fit in their mouth.  When selecting tank mates it is important to realize these fish do have distensible mouths and to stock your tank keeping in mind your lionfish’s eventual size- When a dwarf fuzzy is an inch long it likely won’t go after that snow onyx clownfish, but when it’s a full 7 inches it may seem like a more feasible and delicious option.  That being said, lionfish are generally not territorial and will usually get along well with others, of the same and other lionfish species.  Though they have venomous spines they can be bullied by aggressive tank mates such as frogfish, triggers, puffers, or eels so these should be avoided as well.

Size– The name “dwarf” can be misleading — these fish can grow to seven inches in length.  While they are fairly sedentary, perching on rocks waiting for food to go by, they still need a decent amount of space to swim, and also enough filtration to handle the copious amounts of waste they produce being large predatory fish.  Another factor to consider is that because lionfish cannot be housed with small peaceful tankmates such as damsels or cardinalfish, they need larger companions and hobbyists generally have greater success keeping these fish in larger systems.

Diet– Feeding a lionfish is one of the primary reasons owners become so attached to these fish.  They are predatory and put on “displays” to distract their prey before they swallow it whole.  Lionfish can eat small fish or shrimp (including ornamental shrimp so they are NOT reef safe in this regard), but they should never be fed feeder goldfish.  At the Sustainable Islands project we transition our lionfish over to frozen krill and silversides.  This makes feeding them easier as you don’t need a secondary tank to hold food fish and is a more convenient alternative to feeding live foods.  Feeding a lionfish frozen food can still be entertaining and interactive- using a clear feeding stick you can wiggle the food in front of the lionfish to trigger their feeding response, though usually after a few feedings the lionfish will beg at the surface and devour whatever food is offered.

Distribution– Dwarf fuzzy lionfish have a fairly large range from the eastern coast of Africa to Indonesia.