There are more than 300 species of cardinalfish, found in tropical and subtropical waters around the world, typically in shallow waters near reefs. Most all are nocturnal, with the exception of the Banggai Cardinal fish (Pterapogon kauderni), which is diurnal and one of the most popular cardinal fish in the trade.

Species within Apogonidae are found in the Atlantic, Indian, and Pacific Oceans and the connected waters. Most species are marine, but a few live in brackish or even fresh water.

Cardinalfish normally have large eyes characteristic of nocturnal animals, along with a large mouth commonly found in mouth brooders. Two dorsal fins are characteristic as well.

They are carnivores, feeding on zooplankton and small animals and benthic invertebrates. They have also been known to eat smaller fish.

Cardinalfish are generally an excellent aquarium fish, and if paired or kept in groups can live peacefully for many years, often-times five years and longer.  If keeping more than a pair, conditioning a group to live peaceably is challenging and groups of 8 and more are suggested, often starting with a group raised together is the best way to keep a larger number successfully.

Spawning occurs frequently in healthy captive populations and pairs, but it has been a challenge to raise cardinals on a commercial level.

The male normally holds for a week to three weeks depending upon species, and during this time does not eat. At SA we speculate that a female probably chooses a different male in rotation. We have had experience where a pair will produce for a few broods and then the female will attack the male. We speculate she is probably trying to get the male to accept a new clutch, and the refusal results in aggression.

Upon hatching from the eggs with the male’s assistance, the brood is ejected from the male’s mouth, and the larvae live a planktonic life before settling in to the reef (often taking shelter from predators in a sea urchin). The Banggai cardinal skips the planktonic stage, and the young fish move directly to benthic life.

A virus has been identified in banggai cardinals originating from the ocean that seems to result in death in the majority of animals introduced to hobby aquariums. SA has spent years developing large broodstock populations which we believe are virus free.

Other than the banggai, cardinals live in sheltered areas by day and are more active at night. They are not aggressive towards other fish. The SI project has had great success bringing in smaller cardinals including pajama and blue eyed cardinals from the Indo Pacific. 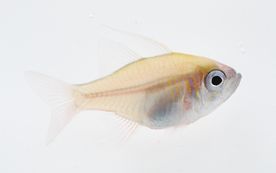 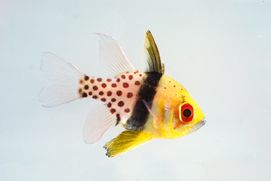