There are a few things that all hobbyists involved in marine ornamentals focus on and question with regard to Butterfly fish of the family Chaetodontidae:

An additional note on Coral-Eating Butterflies:

We consider the sale of the so-called “obligate corallivore” species a sustainable practice when handled through the Sustainable Islands project for several reasons:

* The definition of an obligate corallivore would generally include that the species requires a major portion of its diet to derive from living coral polyps. In the ocean and most aquariums, this may seem to be true, but we and many hobbyists have found that most of these species can be trained to eat other types of prepared foods and live a long and healthy life in captivity without any coral tissue in their diet. It would seem in these cases that they are actually not obligate coral-eaters at all!

*Hobbyists continue to seek-out these species due to their rarity and beauty, but the fish that come in from traditional wholesalers/transhippers usually don’t fare too well. They are delicate and tough to care for initially, so the average hobbyist may purchase many before they get one stout enough to survive and begin feeding on non-coral foods. We and our partner collectors target only small fish and then invest time and effort to make sure they are ready to go to stores and hobbyist’s tanks. This means that they have put-on weight and are already eating a variety of dry and frozen foods agressively; they adapt well if the care and time is taken with them. They also seem to learn quickly from their tank mates when it comes to eating.

*The fish in this category that do actually make it from wholesale to hobbyist and survive are usually larger, more mature fish that we prefer to leave in the ocean as broodstock (the smaller fish are also cheaper to ship, using less space and fuel to bring from the reef to the US). These fish also seem to have a more difficult adjustment to captive life and diets (another reason for us to seek small fish). Due to the demand for these species, the collectors and indigenous farmers will collect these species regardless of their survival, so we educate them on the preferred size and quantity so as not to decimate the reefs and to ensure high survival of those that are collected.

* When our fish are ready to ship, they are mature, fat, and healthy and eat a variety of foods so they survive very well in fish-only systems. Since they are already eating prepared foods, we do not recommend placing these fish into reef aquariums or offering live coral as food.

*SA/SI does not harvest any wild corals; these are left in the ocean. Sustainable Aquatics has established many small coral farms that supply us with maricultured corals (the original broodstock for these having been collected from the reefs as cuttings). The farming racks full of corals serve as a refuge for small fishes settling out of the plankton, including small butterflies, of which we collect a few for our Sustainable Islands project. 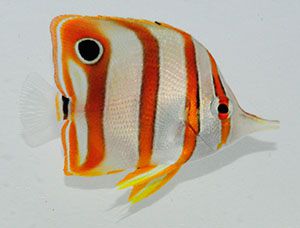