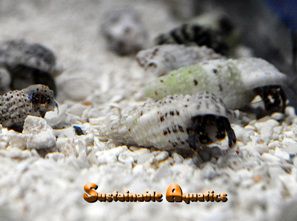 A necessity for every tank, the Blue Leg Hermit Crab (Clibanarius tricolor) is the foundation for any tank’s cleanup crew.  Active and entertaining, this hermit crab will be found scurrying around the tank, picking at algae and uneaten food, all the while aerating the substrate. They are one of the few reef-safe crabs and require minimal care to thrive. Though not mandatory, it is recommended to stock these crabs at one crab per gallon for optimal efficiency.

Physical Description- The Blue Leg Hermit Crab is a small crab with bright blue legs that have orange/red banding. This species also has equal sized claws and are sometimes called the “Equal Handed Hermit Crab.”

Temperament- These hermit crabs are generally peaceful and will not bother other tank inhabitants. That said, if larger shells are not readily available after molting, they will go after snails or other animals with shells.

Diet- These hermit crabs are omnivorous. They will eat hair algae, film algae, and the dreaded cyanobacteria. They will also eat almost any meaty food that makes it to the bottom of the tank.

Distribution- The Blue Leg Hermit Crab is found throughout the Caribbean Sea.