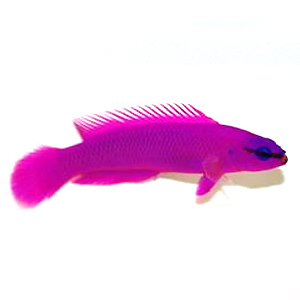 The Orchid Dottyback (Pseudochromis fridmani, Klausewitz, 1968) is a vibrant, charming, and active fish that will surely become the center of attention in most tanks.  Found foraging amongst the rocks, this fish will actively “investigate” every nook and cranny in the tank, seeking both food and the best hiding spots. Most Orchid Dottybacks in the industry are captive-bred, making them extremely hardy and accepting of most frozen and pelleted foods.

Physical Description: The Orchid Dottyback has a long, slender body in a brilliant shade of magenta or violet. Orchid Dottybacks raised at Sustainable Aquatics are fed our hatchery diet, resulting in exceptionally bright colors and robust health.  Often confused with the Magenta Dottyback (P. porphyreus), the Orchid can be distinguished by the black stripe that runs from its nose, through its eye, nearly to its gill cover.

Temperament: Orchid Dottybacks are considered semi-aggressive, but only under certain circumstances.  They will actively defend their territory in the tank from other dottybacks or similar-sized fish, but this can easily be alleviated by providing them plenty of live rock and other hiding spaces.  Also, should multiple dottybacks be added to the same tank, it is best to add them all at the same time to prevent disputes over territory.

Diet: Orchid Dottybacks are carnivorous and should readily accept most meaty foods, such as brine shrimp, mysid shrimp, or other prepared foods.  They also respond very well to most pelleted foods, such as the SA Hatchery Diet, which helps provide them with a balanced diet for continued growth and vibrant coloration. Diet: A mixed diet of frozen foods and dry pellets or flakes are recommended to ensure proper health and nutrition. Like all the captive-bred fish at Sustainable Aquatics, the Dry Hatchery Diet is highly recommended. These fish are accustomed to the food and will readily accept it!

Distribution: Orchid Dottybacks are found along reef ledges only in the Red Sea.